What is acrostic Jewellery? Rings and pendants were set with coloured gemstones where the first letter of the particular gemstone spelt a secret  love message, for example the word "Regards" as shown in our featured image. a Victorian Five stone ring with the gemstones, Ruby, Emerald, Garnet, Amethyst, Ruby, Diamond. other secret messages such as "Adore" or "Dearest" were also very popular, around 1837-1901.Acrostic Jewellery first appeared in the georgian period, circa 1800, but really became fashioable in the reign of Queen victoria.

People also used thier own secret messages, that were more personal to them, it was always very clear that the piece was an acrostic jewel, becuase of the random mix of gemstones.

It is believed acrostic jewelry really got its start with jewellery designer Jean-Baptiste Mellerio of the House of Mellerio, a favorite of Marie Antoinette. He started with a ring using gems that spelled “J ’adore,” which is “I love” in French. Napoleon Bonaparte even had some very famous acrostic pieces that commemorated events.

Sometimes Gemstones can be arrranged in patterns and designs such as a flower design, and  complicated designs pieces can command high prices, especially with historical provenace.

Today Acrostic Jewellery is experiencing a revival, thanks to the growing interest in Antique and sentimental Jewellery through social media platform instagram, and also modern Jewellery Houses,

Here is an acrostic Gemstone chart showing how the alphabet is used with different gemstones, note with some letters there are no gemstone equivalant, but this was for letters that were not used, most words were derived from french lists, to this day some pieces of acrostic jewellery remain a mystery, it may be that a secret message is coded in another language. 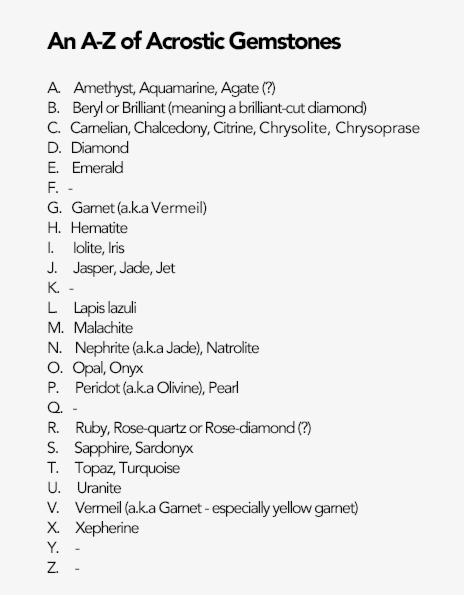 Today Acrostic Jewellery is experiencing a revival, thanks to the growing interest in Antique and sentimental Jewellery through social media platforms and also modern Jewellery Houses,